We’re at a critical moment in the fight against Keystone XL and the tar sands. Only a few days ago, President Obama responded to threats from Congress by promising to veto any bill that required him to approve the Keystone XL pipeline. Now, following a ruling by the Nebraska Supreme Court, the decision about the pipeline is once again in Obama’s hands. We’re calling on him to go beyond his veto threat and finally reject this pipeline once and for all. 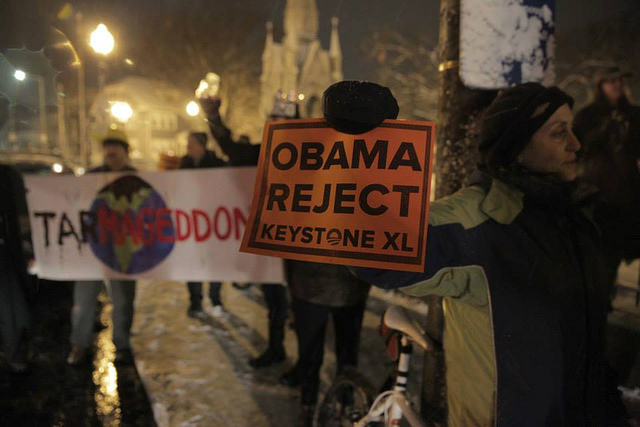 We’re hoping that this will be the home stretch of the fight against Keystone. But Big Oil is scheming to find other ways to bring tar sands oil into the US through new pipelines, on railcars, and more. So in addition to working to stop the Keystone XL pipeline, we’re campaigning to keep tar sands oil out of Massachusetts entirely, and we’re working to pass dozens of town resolutions in support of a statewide ban on tar sands oil. This is a great moment to get involved!

Along with national groups like Rainforest Action Network, 350.org, CREDO, Sierra Club, and more, we’re calling for vigils all over Massachusetts on Tuesday, January 13, 2015 to stop the KXL pipeline and ban tar sands oil.

We've created a guide for organizing vigils -- check it out for tips and ideas!
If you decide to plan a vigil, list it online ASAP using this link and we'll help to publicize it through social media, through our Monday newsletter, through an email blast to our entire BFP / 350MA list, and more!
Do you like this post?
Tweet