Here are eleven reasons (count 'em!) to give to Better Future Project before the year is up.

7. The Climate Summer riders look great on national TV. (Did you catch them on Al Jazeera America this summer?)

6. We provide hands-on support to incredible divestment activists on 14 campuses across the state. At Harvard, for instance, we work closely with the students who sued Harvard for its failure to divest and even blockaded the administration’s office.

5. Rush Limbaugh has hated our guts for years. 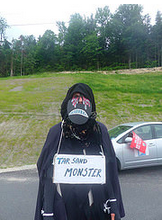 Give today, or the dreaded tar sands monster will get you! (Seriously, though—we’ve organized countless vigils, rallies, and events to oppose Keystone XL and tar sands oil, and we'll continue to stand strong in the coming months and years.)

2. We sent more buses to the historic People’s Climate March in New York City than any other regional or state-level organization in the country.

1. Climate change is the single biggest issue facing humanity, and 2015 will be a pivotal year.

Give today, and help us build a movement that’s bigger and better than ever.