The governors of six New England states, including Massachusetts, met in Hartford, Connecticut last week to discuss regional energy policy. On just a few days notice, 47 groups, including 350Mass, mobilized to issue a joint press release calling on the governors to focus on renewables and efficiency, not dirty fossil fuels. Dozens of activists from across the region gathered in person outside the meeting to bring the message home! Check out the video here!

Tufts Students Sit In for Divestment 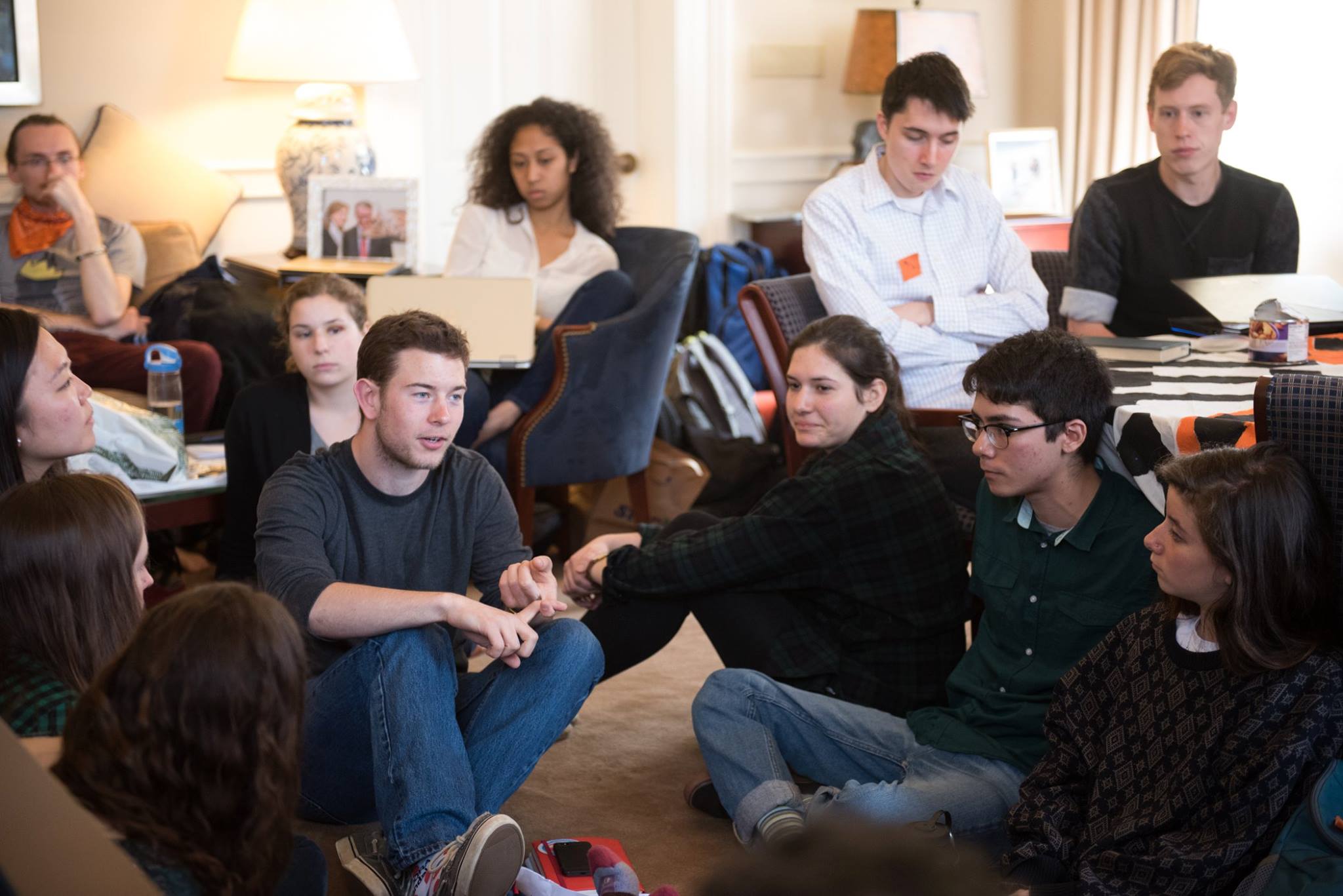 On Friday, Tufts students concluded a three-day sit-in after securing a written statement from their administration agreeing to an in-person meeting between students and the chair of the Board of Trustees. The Tufts action was the latest in a series of sit-ins and blockades for divestment on campuses all over the country. Read all about the sit-in in The Boston Globe, and check out the photos here!

An Amazing Week in Harvard Yard 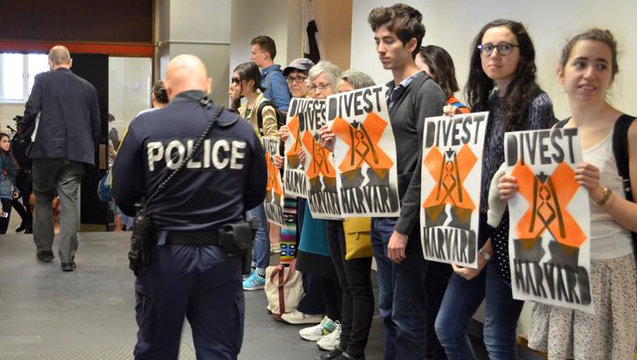 Last week, hundreds of Harvard students, faculty, and alumni, along with members of the greater Boston community, shut down business as usual at one of the country's most powerful institutions. 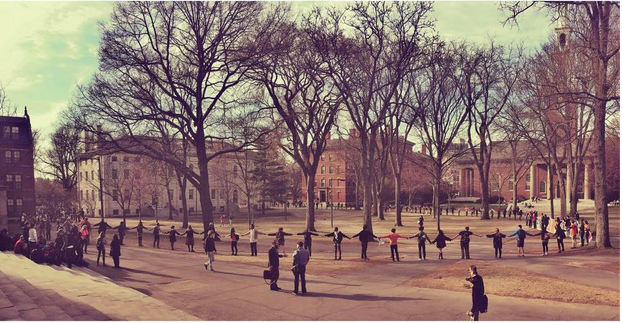 Check out all the photos from the week here!

It was an incredible week -- and it's only the beginning. We'll keep turning up the heat until Harvard chooses to stand on the right side of history. Stay tuned! 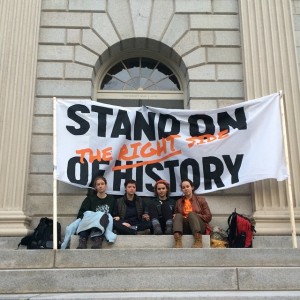 Harvard Heat Week is officially underway — at this moment, students, alumni and faculty are blockading Massachusetts Hall to demand that Harvard divest from fossil fuels. The blockade will continue all week, along with an amazing line-up of rallies, speakers, and more — check out the full schedule here! The week will culminate with a final rally in Harvard Yard on April 17. Join us as we celebrate the recent successes of the divestment movement and commit ourselves to continuing to push for radical action on climate change!
WHAT: Harvard Heat Week Closing Rally
WHEN: Fri, April 17, 6pm – 7pm
WHERE: Science Center Plaza, Harvard, Cambridge

Fighting for a Living Wage and a Livable Planet 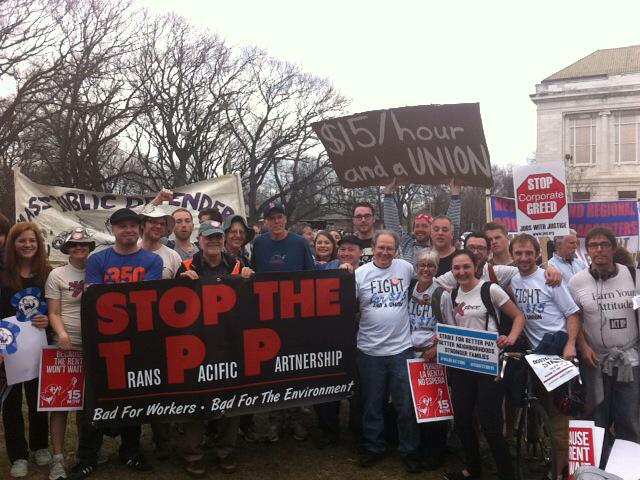 It was great to see such a strong climate justice contingent at today's #‎WageAction #‎Fight4Fifteen march. Economic and climate justice are intimately linked — as Bill McKibben said today, there’s no such thing as a living wage on a dead planet! Better Future Project staff, 350 Mass volunteers, and student divestment activists joined community groups, labor unions and faith communities from across Massachusetts for a massive march and rally. Tens of thousands of others will join Fight for Fifteen rallies and mobilizations across the globe tomorrow — stay tuned!

Thank you to everyone who was there!

When we first kicked off the campaign to save Cape Wind, we set an ambitious goal: we wanted to reach 1,000 petition signatures by the end of February.  We're big believers in beating our goals, but 110,000? Definitely didn't see that one coming. Over the past two months, our last-ditch effort to save Cape Wind has built tremendous momentum. We held a huge rally on Boston Common on February 28, and thanks to our friends at CREDO Action, more than 110,000 people have now signed a petition calling on National Grid to save Cape Wind. We met with National Grid executives in Massachusetts a few weeks ago. Now, we're getting in touch with their boss, the London-based CEO Steve Holliday. He needs to know about the public outcry prompted by his company's decision to withdraw their contract with Cape Wind. Click here to tell National Grid CEO Steve Holliday that more than 100,000 people are calling on his company to save Cape Wind! Hundreds of people have already tweeted at Holliday, and we're only just getting started. The more people contact him on Twitter, the more pressure he'll feel to respond. Join us!  Don't have a Twitter account? Don't worry -- you can set one up in just a minute by following the instructions here. No specialized skills required!

An Important Message about Climate Summer

It is with a heavy heart that I write to you today with the news that we are suspending our Climate Summer program.

We have determined that at our current levels of staff capacity, it is not possible for Better Future Project to support both Climate Summer and our 350 Massachusetts network in a way that would allow both programs to truly thrive.

As you may know, Climate Summer launched in 2009 as a program of Students for a Just and Stable Future, and when we founded Better Future Project in 2011, Climate Summer became our first program. Over the last six years, more than 125 young people have graduated from Climate Summer, and many of them are now playing important leadership roles in the climate movement on their campuses and in their communities. As riders, they engaged with thousands of community members and hundreds of faith communities and partner organizations (people like you). They helped host countless events and earned hundreds of media hits.

And as our first program, Climate Summer played an essential role in getting Better Future Project off the ground. I am so very proud of the work of everyone involved in Climate Summer -- staff, riders, partners.

As part of our efforts to further strengthen 350 Massachusetts, Marla Marcum, under whose leadership Climate Summer has grown and matured over the past six years, is now pivoting to support the 350 Massachusetts network full-time as our new Network and Trainings Coordinator. Marla will bring her seasoned organizing experience to help this network continue to prosper and develop.

Thank you for all your work building the movement in Massachusetts and beyond, both through ClimateSummer and through your efforts in your communities.

We at Better Future Project look forward to working together to achieve our shared goals, and hope to be able to collaborate with all of you on the road ahead.

On March 9, the Great Barrington Select Board voted unanimously to pass a pro-divestment resolution! The resolution states the select board's support for the bill to divest the state pension fund from fossil fuels.

In late February, Gary Stoller, the divestment coordinator for 350Mass Berkshires, had presented to the Select Board about the climate crisis and the history of successful divestment movements in the United States.

12 towns and cities in Massachusetts, including Boston, Cambridge and Framingham, have now passed resolutions in favor of fossil fuel divestment.

Congratulations to 350Mass Berkshires! Read more about our efforts to divest towns and cities across Massachusetts here. 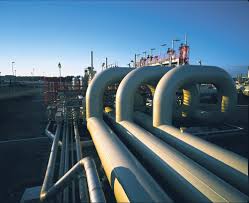 Spectra Energy just can't get enough of pipeline expansions! In addition to the Algonquin Incremental Market (AIM) expansion, they're proposing a second expansion of their existing pipeline network in MA. The proposed expansion, also known as the "Atlantic Bridge" project, would require the construction of a new compressor station in Weymouth.

South Shore residents are mobilizing to stop this polluting and unnecessary project! There will be a training session on Saturday, March 14, location TBD, led by Bill Manter, who has been part of the grassroots resistance to the Kinder Morgan pipeline. Manter will discuss the basics of pipeline opposition and help people prepare for the open houses that Spectra Energy is planning to hold over the next few weeks!  To learn more, click here, or contact [email protected] and/or Alice Arena, [email protected] 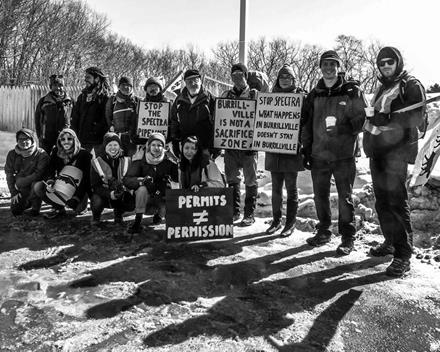 On March 3, FERC issued an official permit to Spectra Energy's effort to expand the Algonquin Pipeline (the Algonquin Incremental Market expansion, or AIM). The pipeline runs from New York through Connecticut and Rhode Island to Massachusetts, and the proposed project involves expanding the Burrillville, RI compressor station and building a new stretch of lateral pipeline in West Roxbury.

Expanding the pipeline would expose local communities to the risk of explosions and accidents while deepening our reliance on polluting natural gas. The fight against this project is not over! Our allies at FANG (Fighting Against Natural Gas) just organized a three-day march against the pipeline, earning coverage from The Boston Globe, The Providence Journal, WPRO, and more, while the Stop West Roxbury Lateral Pipeline group is considering legal action. Stay tuned for updates!